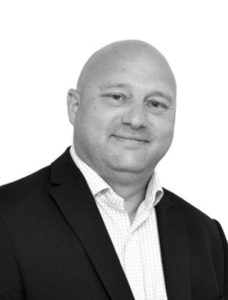 Gareth became Contracts Director in June 2019, having joined the company as a Project Manager in 2013, progressing to Contracts Manager in 2017. He has over 20 years’ experience in the mechanical industry, having begun his career as an apprentice plumber in 1997. Gareth worked his way through various roles from plumber to plumbing supervisor and mechanical supervisor, before moving into project management.

When he joined AMD, Gareth managed the Mechanical side of our Lloyds Banking Framework before moving into other areas of the business and undertaking more challenging projects, ranging from £200k to £3million.

Gareth has experience of a wide range of M&E projects across a variety of sectors including new build, residential, education, leisure, refurbishment, framework and banking frameworks. His hands-on experience and knowledge has proven invaluable in some of our more complex projects.

Gareth is a keen carp angler, but now a father of two sons he finds most of his spare time is taken up with football. He volunteers as headcoach of mini soccer for Hythe Town Youth FC (teams from Under 6s to Under 11s) and is also the manager of the Under 8s which his youngest son plays for. When he gets time, he enjoys good food and travel with his wife and family.

Back to Our people